The Tiffany lamp as it is known today, with its heavy bronze base and intricately worked glass shade did not exist before 1899. In that year at least three of the still popular Tiffany lamp types were introduced.

One of them was the Nautilus, which was included in the exhibition of Art Nouveau in London in 1899. It is one of the earliest leaded glass lamps Tiffany ever made, for which he filled patent claim No.30,665, on May 2, 1899.

It appeared in several forms, one had a genuine Nautilus-shell shade, one a leaded glass shade and one the „Mermaid“ bronze base designed by the sculptor Louis A. Gudebrod.

The Nautilus lamp was, in addition to being one of his earliest leaded glass lamps, also an early example of his metalwork.

The design was adapted to the electrical light bulb. Its adjustable shade and the simple down-to-earth look af the lamp are typical of Mr. Tiffany‘s personal work. 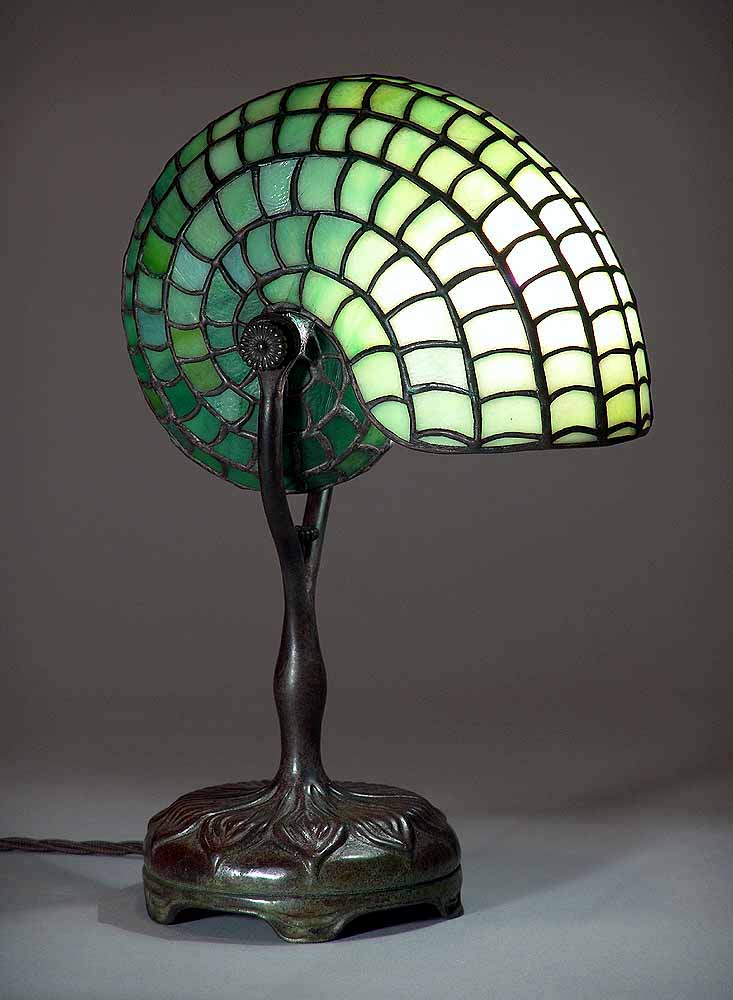 Please E-mail for your comments and ordering information.

This website uses cookies to improve your experience while you navigate through the website. Out of these, the cookies that are categorized as necessary are stored on your browser as they are essential for the working of basic functionalities of the website. We also use third-party cookies that help us analyze and understand how you use this website. These cookies will be stored in your browser only with your consent. You also have the option to opt-out of these cookies. But opting out of some of these cookies may affect your browsing experience.
Necessary immer aktiv

Any cookies that may not be particularly necessary for the website to function and is used specifically to collect user personal data via analytics, ads, other embedded contents are termed as non-necessary cookies. It is mandatory to procure user consent prior to running these cookies on your website.